Our 31st Annual June Jam Muskie Tournament on June 19th, 2021 was another success!

We hosted another great tournament on seven premier Muskie waters in Polk County: Bone, Cedar, Deer, Round, Wapogasset, and Blake Lakes, and the Apple River Flowage.  This is the 2nd year of new ONE DAY format.

Minnesota’s Muskies, Inc. Chapters in conjunction with the Hugh Becker Foundation sponsored the annual High School Muskie Qualifying Sectionals through out the State and the State Tournament to be held at Vermilion Dam Lodge on Lake Vermilion.  The North Metro Qualifying Sectional was held on June 11th, 2021

League Nights are intended as an opportunity to engage, retain and recruit both existing and new as well as prospective members and educate them and our Youth on the issues affecting all fisheries.

New this year we have formally added a lake clean up component to League Nights. We will have a small Lake Clean Up Contest will some prizes to recongize this important effort.  (More details to follow)  We ask that you take the opportunity to clean up the launch, shoreline and on the water that you are fishing on that evening.  Please send in photos of your clean up efforts and the name of the lake cleaned. 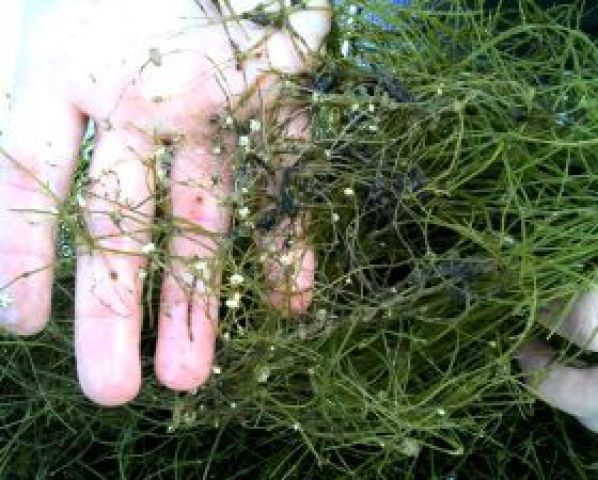 What is starry stonewort?

Starry stonewort are grass-like algae that are not native to North America. The plant was first confirmed in Minnesota in Lake Koronis, near Paynesville in Stearns County, in late August of 2015. Plant fragments were probably brought into the state on a trailered watercraft from infested waters in another state. In August of 2016, starry stonewort was confirmed in several north-central Minnesota lakes in Beltrami, Itasca and Cass counties. DNR invasive species staff found that a number of other reports of suspected infestations were native species that appear similar to starry stonewort.

How to identify starry stonewort?

If you suspect you have found a new infestation of starry stonewort, or any other invasive species, note the exact location, take a photo or keep the specimen, and contact the DNR.

Why is starry stonewort a problem?

Starry stonewort can interfere with recreational and other uses of lakes where it can produce dense mats at the water's surface. These mats are similar to, but can be more extensive than, those produced by native vegetation. Dense starry stonewort mats may displace native aquatic plants.

Like all plants, starry stonewort may grow differently in different lakes, depending on many factors. At this time, we cannot predict how it might grow in any one Minnesota lake.

How does it spread?

Starry stonewort is believed to be spread from one body of water to another by the unintentional transfer of plant fragments and bulbils, the star-like structures produced by the plant. These fragments, or mud containing them, can be transferred on trailered boats, personal watercraft, docks, boat lifts, anchors or any other water-related equipment that is not properly cleaned.

What can people do to prevent its spread?

The most important action you can take to limit the spread of starry stonewort and other non-native aquatic plants is Clean, Drain, and Dispose. Clean all vegetation, animals, mud and debris from your watercraft and any water-related equipment before you move it from one body of water to another. Drain all water from your watercraft and bait bucket, keep drain plugs out during transport, and Dispose of any unwanted bait in the trash. Clean, Drain, Dispose is required by law in Minnesota.

What can be done to reduce starry stonewort?

The potential to manage the plant is not well documented. It appears that treatment with herbicides can suppress starry stonewort. Some states use hand pulling, which may be a way to reduce biomass in small areas. Mechanical removal can also be effective. In the case of a newly discovered population of starry stonewort that has a limited distribution in the lake, mechanical harvesting is not recommended because it might create fragments that would speed the spread of the invasive plant within the lake.